What if we could import a generic NodeJS function into our frontend code? In this example, statuses returns results from Firestore.

Instead of writing network requests, wouldn't it be nice to write full stack code, and import it like a normal part of the frontend? Keep reading to find out how I got this working in a real application.

How things are done currently

Then you need to do something like this on your frontend:

There's a bit more work to use a network request in React, but we won't get into it. The point is, now your server code could change, and break the frontend. Wouldn't it be cool to directly import the function, and use TypeScript like normal, to prevent anything from breaking? Whether you use GraphQL, or whatever else, you need to go into your backend project, maybe it's in the same repo.... but I almost guarantee that it's not sitting right next to the code that uses it.

Wouldn't it be great if we could co-locate our server logic with our frontend?

We already put CSS, network requests, and everything else together. It would be interesting if we could put an entire feature, across the stack, together in the same code location.

I got an idea after learning and using grpc. The fundamental part of GRPC, is having a single source of truth. In its case, a proto file. This file contains type definitions for GRPC functions. What parameters they need, what data is returned, and how it will be returned.

It's like TypeScript, but across any language. You create this one type definition, and then you auto generate code in whatever language you want. Maybe we want to use Rust for one GRPC backend. And then we want to call that function from our web frontend. We would create a proto definition. We would create the server function using the proto. Then we would auto generate a TypeScript function that we can call on the web. It looks a bit like this:

If you ask me.... that's some really ugly syntax that could be boiled down to:

This is one of my problems with GRPC... its official web package is written by people who clearly don't use JS often, or love verbose syntaxes. I shouldn't complain, as anyone could make their own web generator from proto, and make the syntax better. I just don't have the time or will for that one ;)

Why did I bring up GRPC? Well, it's cool, it supports bi-directional streaming, and well... it's the whole reason I got this idea! GRPC lets you call functions as if they exist locally in your application. That's the fundamental part of it. Write a grpc server or client in any language, and just call an async function to get some data.

Imagine not needing to handle anything to do with a backend Node server. By running a dev server, it builds your web code, and automatically pulls out .server.js files and runs them using Node. In production you would npm start and your app's server would know to pick up these files and handle calling them when the frontend needs them.

I promise that this syntax IS possible and I have it working. Write normal functions, put .server.js on the end of them, that imported code becomes a promise, and runs on a server!

webpack is a powerful tool that handles bundling application level JS. It has a simple concept called loaders. A loader is just a function that receives all the content of every file imported in your app, and lets you do something with it. The most fundamental ones out there are ts-loader babel-loader css-loader, etc.

To make this crazy cool idea work, we need to make a loader. Here's how I started.

I also had babel-loader in here so I could render React components and parse JSX, but this is the core webpack.config.js

All I'm doing is telling webpack to run in development mode, and to pass all files ending with .js into my magical loader. After, I'm setting up HtmlWebpackPlugin to generate an html file that includes out JS from webpack.

My breakthrough thought in this whole process was: What if I replace the contents of the file with a fetch request.... and then send the function name over the network, with the args passed in? How would I even write that....

Here's how I started. Let's skip all files that don't have .server in the name. Then lets split the file into individual lines. We want to find all the exported variable names.... One way would be to parse the JS to an AST, but I thought I could get away without needing to parse the files that way.

So that's what I wrote next. Match on the lines that contain the text export in them. Then split that line, and grab the name of the export. export const Blah = ... Since the syntax always has export followed by var let const then name, this simple parsing should work just fine.

Really all that's left is replacing those exports with some network code.

If I was making a production library, I would probably throw import serverRequest from 'mylibrary' and actually make the function as a part of my library. For this proof of concept I will do it in the loader. Here's the final result

Think about it, from the end user perspective, they are importing a normal function, the call signature is the exact same, TypeScript will correctly check all the calls to our server exports too! With this loader, all the function calls will now be a promise and act as expected.

There's a few things to note. If you are passing anything to your server functions that can't be parsed to json, like formdata or something, it won't work. It could be added without much effort, but this example doesn't do it. Also, I'm not handling errors either, which we would want to do in a real framework. Lastly, we would want to set the fetch url from an environment variable or configuration variable so that it can be changed for production builds.

Well, we have the frontend part working, how do we make the server part, that automatically works?

I threw this together pretty quick. If we use esm, we can handle importing es modules in Node as is. So we just need to run this script like so: node -r esm server.js. We setup express, add cors, and parse json body data. Pretty standard.

Next up, I do a recursive search for all files with .server.js in the current directory. Then, I import all those files, and add every exported method to an object. If we have two .server.js files, and they export test and test2 respectively, the functions object will look like this:

By adding all these exports to a single object, we can grab the name passed in from our JSON body that our server loader added, and complete this server! Here's the remaining code:

So let's recap this:

I already have some prototype code that takes this idea a step further. When you run your webpack dev server, it runs the node server, and hot reloads when you change code. So the developer doesn't have to think about anything when making server code.

Releasing to production would involve the normal frontend build process, and then running this special node server that we demo'd here.

Phew... what are your thoughts after reading? Is this practical? My opinion is yes. I wouldn't be surprised if Next.js took this idea, since they have already brought api routes a bit closer to the frontend. The only problem I see is new developers getting confused, and blurring the lines a little TOO much between client and server. But I'm crazy, I like thinking up a new magical syntax and way of doing things.

Send me your thoughts by replying to the newsletter, or tweeting me. 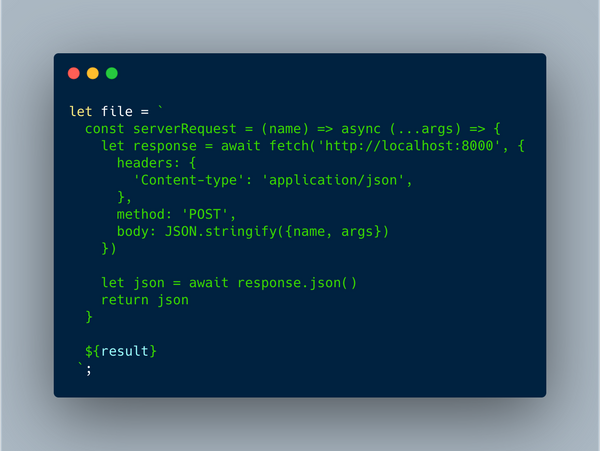 TL;DR: I am going to be much more active blogging and recording video content. I am also starting to offer premium tutorials and articles around coding. Next week is